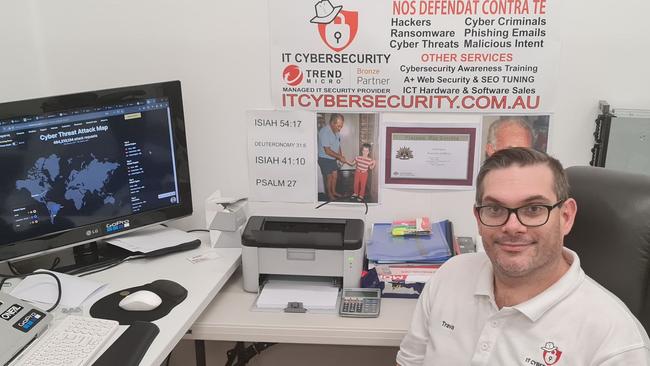 IT Cyber Security Toowoomba owner Travis Howell. He launched the business in late 2020 to protect Toowoomba businesses and individuals from the thousands of hacking and cyber security breaches recorded annually.

In 2020, Australians reported about 82,000 hacking or phishing attacks and lost about $15 million. Now a Toowoomba man is working to protect the regions business and the public from online threats.

TOOWOOMBA is now home to its first dedicated cyber security company after IT guru Travis Howell moved into the field.

He launched IT Cyber Security Toowoomba in late 2020 and has been working with business and home users to keep their data secure.

“I have been designing websites and securing websites for nearly 15 years and have made the move to doing just cyber security,” he said.

Hacking is a growing problem as the world becomes increasingly reliant on digital networks for business.

“I want to help the public and businesses protect themselves from these relentless cyber criminals.

“I see so many people on social media posting that they get (phishing) phone calls, emails and SMS.”

“Some are getting caught out and losing everything.”

In 2020, Australians reported about 82,000 hacking or phishing attacks and lost about $15 million, according to the Scamwatch database.

Mr Howell can secure home and business networks, along with smartphones and tablets.

He will also engage in “ethical hacking” that involves a client hiring Mr Howell to hack their network to find security black spots.

However, cybersecurity is about more than just digital locks and a good password.

“Hackers are experts at manipulating the human psychology to gain access to sensitive data,” he said.

“When people are getting these phone calls, they need to understand that no major company or government agency will call and ask for details.

“There is a hacker on the other end of the line just waiting for the victim to fall for their trickery so they can exploit them.”